Domination comes from a marriage of fortunate circumstances, with market forces, luck and timing being just three. The same was true of the Web. In the 16th Namahn Lecture, Alex Wright, Information Architect at The New York Times and author of Glut: Mastering Information Through the Ages, argued that history could have produced any number of alternatives. In his lecture, heexplored the Web’s lineage and argued that by understanding what might have been, we can help shape the Web’s future.

A recurring theme in every Web precursor cited by Wright is social, collaborative, creative and transparent information sharing. This was often colored by a Utopian vision on the part of the thinker, inventor or scientist who believed, for example, that world peace could be attained or that people could be freed from institutional constraints through knowledge sharing. However, the Web we know today was not designed for users as creators or for groups: it is the domain of the individual. Even so, with Web 2.0, a growing number of websites are trying to address issues raised time and again by the Web ‘pioneers’. 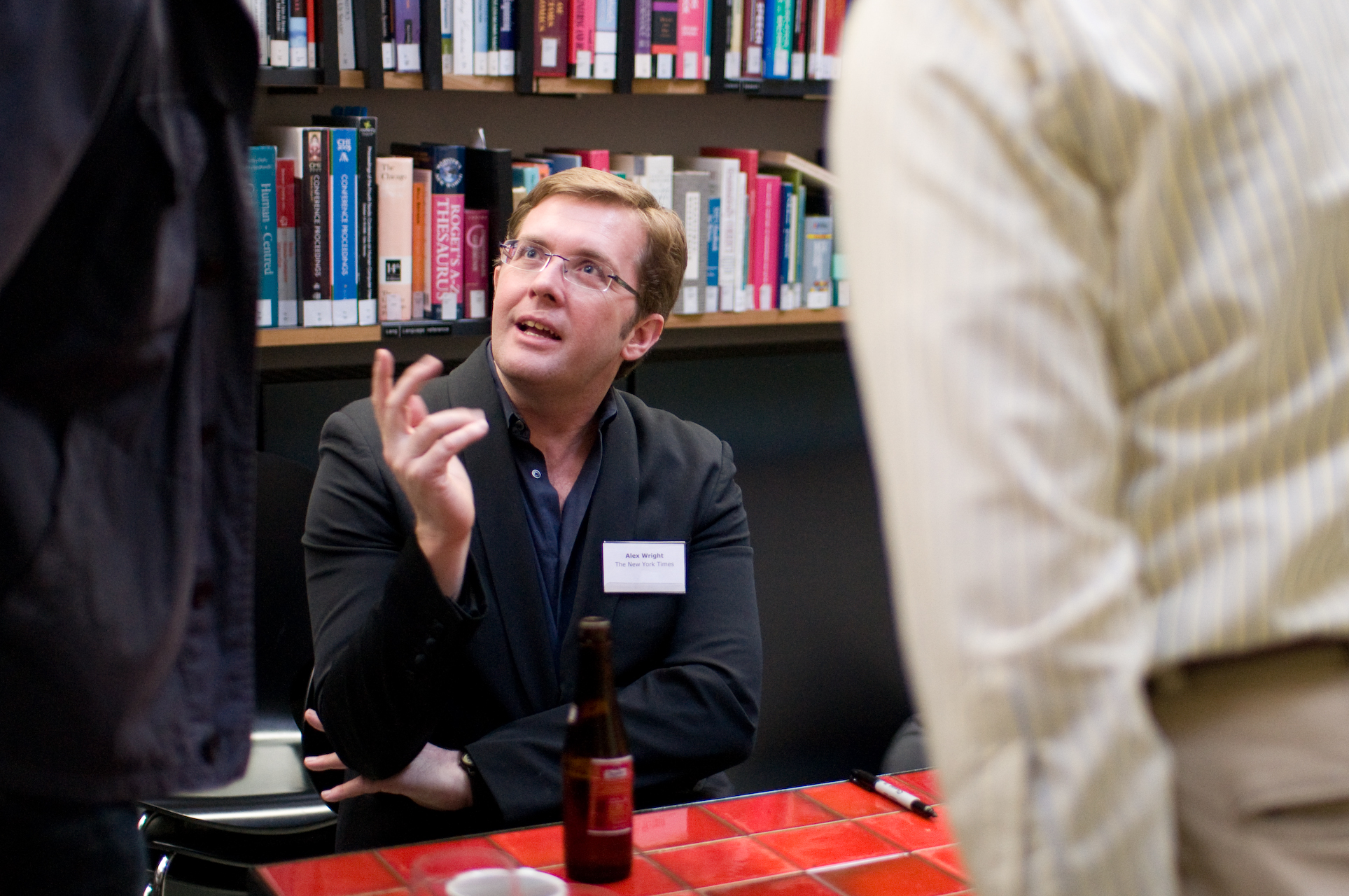 The idea of electronically sharing information on a global scale existed in the imaginations of visionaries as far back as the 19th century. The American librarian, Charles Cutter, wrote in 1883 about the library of the future. He imagined a desk with a keyboard connected by a wire to a screen. Some 50 years later, in his essay ‘World Brain’, H.G. Wells imagined a time when people would electronically share information across the globe to eventually form an encyclopedia, the “New All-Human Cerebrum”. Pierre Teilhard de Chardin, a French Jesuit, philosopher and Utopian born at the end of the 19th century, wrote about an electronic network through which all people could share information to educate themselves. The Catholic Church banned his writings, yet despite this, he developed a cult following, a situation echoed today in the case of Ted Nelson (see further).

All this was theoretical thinking. The tools did not yet exist to actually make it happen. The first person to try was the Belgian Paul Otlet, inventor of the Universal Decimal Classification (UDC) system. The tense period between the two world wars provided the backdrop to his belief that by sharing information, world peace could be attained. For Otlet, libraries were too limited because they only concerned the organisation of books. He wanted to organise the information within the books. His international bibliography of information, the Mundaneum, was built in Brussels and functioned between 1921 and the mid-1930s, funded by the Belgian state. Otlet’s state-of-the-art tool at that time was the index card. Nevertheless, his drawings demonstrate the first concept of a computer as substitute for the book, containing not only written but also visual (moving) and audio information. When the government cut off funding, the Mundaneum was abandoned and later destroyed by the German occupiers.

All knowledge of Otlet and his creation died with him in 1944 until some 30 years later, when a student stumbled upon his old office in Brussels. Thanks to this discovery, part of the Mundaneum has been recreated in Mons and Otlet is now acknowledged as one of the forbearers of the Web. Although Otlet’s ideas were technically simple, they were in some ways more sophisticated than our Web. Otlet claimed that to understand a book you must also understand what came before and after it. Otlet thought you could mark this relationship between documents with a “link”. He also believed this link could tell you something. Our Web has links but they do not explain why something is linked. Otlet’s web would have married top-down and bottom-up information. Examples of this on the Web today are FaceTag (an attempt to merge top-down formal classification with social bottom-up classification) and VOTELINKS, which assigns meaning to a hyperlink.

Vannevar Bush was a science advisor to President Roosevelt, an inventor and respected thinker. However, he is most remembered for an essay written in the 1930s but published after the war, “As We May Think”, in which he imagined a fictional machine called the Memex, used by scholars to access documents on microfilm. He believed scholars should do more than just read information but relate what they read to other documents in order to build a trail that could be followed by other scholars. Eventually these trails would create a new kind of encyclopedia. On the Web today, blogs and trackbacks come closest to mimicking what Bush imagined long before digital computers even existed. Sites like del.icio.us allow you to store bookmarks and publish them for others to see. Bush inspired Eugene Garfield, who was not interested in the content of an article but in the footnotes. He maintained that by following these, a web of influences would develop, a “citation ranking” that would help you to evaluate if the information really mattered. This ranking is still used today. Garfield’s web would have looked like Google (openly acknowledged by its creators as Garfield’s idea).

Doug Engelbart read Bush’s essay in 1945. It inspired him to develop a theory of information organisation and in the 1960s he developed a revolutionary “on-line system”. He was the first person to think that a computer could be used in work and to network, not just to process numbers. His famous 1968 demonstration of this on-line system, for which he also invented the mouse, heralded the birth of the PC. The closest we come to Engelbart’s idea on the Web today are wikis and extranets. Collaborators of Engelbart went on to set up Xerox PARC, the birthplace of the PC where they invented “notecards”, precursors to hypertext.

There would be no Web if not for Ted Nelson, a controversial figure who coined the phrase “hypertext” in 1965. A visionary, Nelson also thought that computers could be used as more than just calculating machines. He created Xanadu, a hypertext system with two-way linking and protection of rights that enabled the user to edit and to give feedback, not just to read. Nelson is no fan of today’s Web, referring to it as “decorated directories” co-opted by companies. Nelson has difficulty getting published, and his views – like those of Pierre Teilhard de Chardin before him – are still considered revolutionary.

A classmate of Nelson’s, Andries Van Dam collaborated on the first hypertext editing system, HES, used by NASA for the first moon landing. He also created IRISweb, a closed system for use in higher education. IRISweb did not use one web browser. Rather each separate tool had a networking functionality written into it. Everything networked and links worked in both directions. Looking back on these examples, several themes occur time and again:

Can Web 3.0 address these themes? In Wright’s view, Web 3.0 will probably tackle identity and reputation management. Two-way sharing of information already exists, but only in contained experiences. Things are becoming smaller on the Web, more structured and with a special purpose – for example, Twitter. Yet user-generated information is radically changing the world of knowledge. Who is a journalist and who is not? The traditional gatekeeper industries are under pressure. The world is in the process of renegotiating information. A social revolution is taking place after all.