De Waal argues that morality is older than religion. All religion did was appropriate innate human nature. Among people who do not believe in evolution, many contest this view. In the US, where De Waal now lives, Creationists believe that God created man, and that we only have morality because of God. Even some American scientists claim that Moral Law cannot be explained and will never be explained by evolutionary biology.

This does not prevent Social Darwinists from applying so-called Darwinist ideas (survival of the fittest) to society: “if you can’t afford it, tough.” But De Waal argues that the approach of these Social Darwinists is incorrect: it does not correctly reflect either what Darwin proved or our true nature as humans. If our ancestors had not cooperated millions of years ago, we would not be where we are today.

Since Darwin, the morality debate has divided the world of biology into two camps: cooperation – the outcome of natural selection – is seen as a result either of being nasty by nature or of being innately social. The Veneer Theory (the accepted Darwinist view from the 1970s until 2000) argues that morality is a departure from nature, uniquely human and calculated. Humans are fundamentally nasty at the core with a moral veneer. Morality is all about the pay-off, altruism is hypocritical and the key question is “What’s in it for me?”

De Waal used a Monty Python sketch from the 1970s to illustrate this view, which he considers narrow and outdated. For example, science now proves (through brain scans) that humans derive pleasure from merely anticipating helping others. This would appear to suggest that we are somehow pre-programmed to reach out to others, which leads us to the second theory: Evolved Morality. Darwin and De Waal believe that morality is a product of evolution, continuous with other animals and emotionally based. Humans are fundamentally social animals with innate morality. Since 2000, Darwinists view humans as super-cooperators. 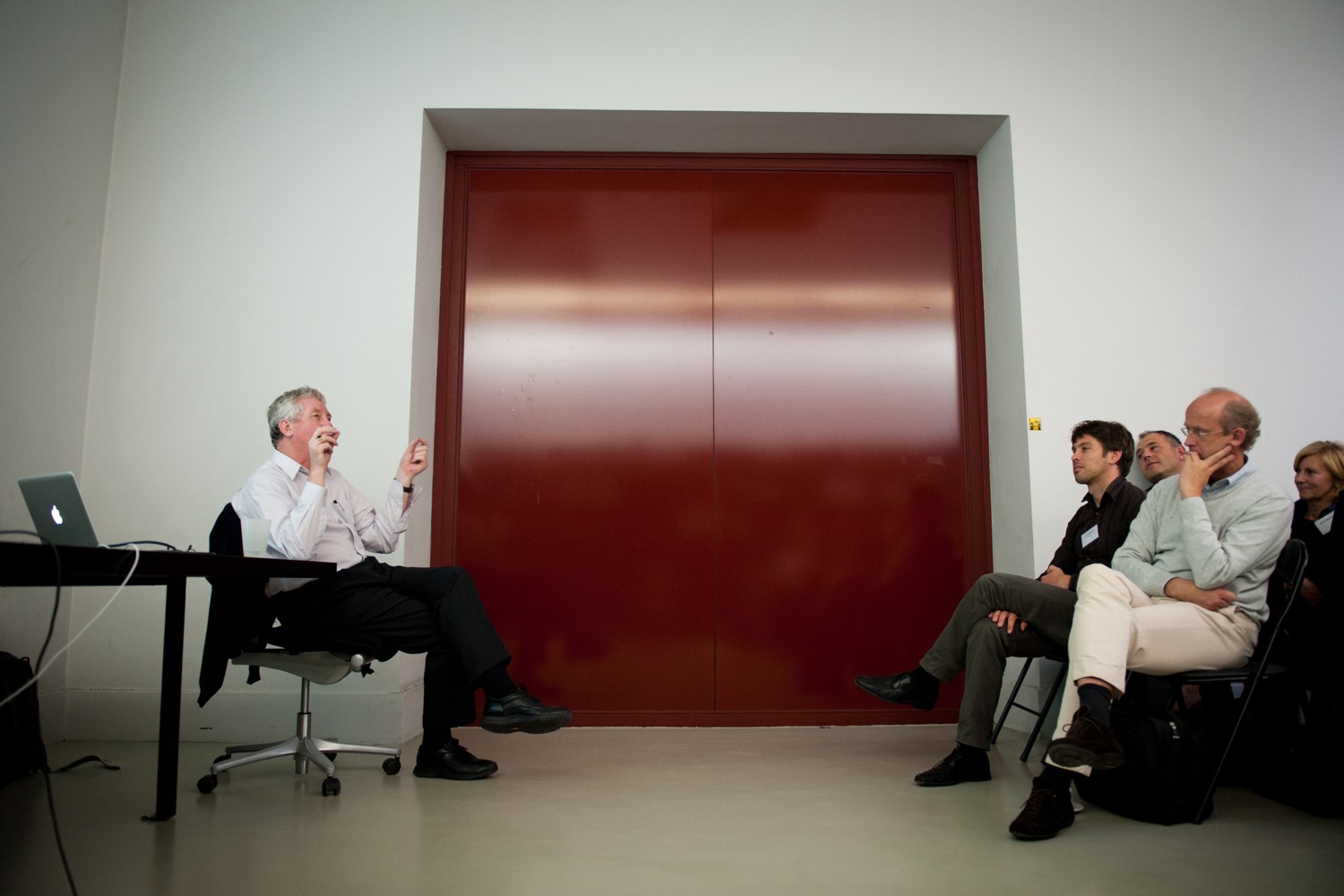 To illustrate his findings, De Waal shared some findings of his research, starting with the position of humans in the evolutionary chain. Humans descend from a long line of group-living primates. DNA now proves we are more closely related to chimpanzees than gorillas. However, most scientists still prefer to believe otherwise. Is it because they are uncomfortable about the aggressive side of chimpanzees? This is also portrayed in popular culture – take the recent blockbuster Planet of the Apes. De Waal points out that although chimps do fight and kill each other, they also reconcile (and need eye contact during reconciliation just like humans); they care for each other in social groups; they laugh and use facial expressions (the subject of De Waal’s first book in 1982, Chimpanzee Politics) in much the same way that we do; and like humans and other apes, they commonly show empathy.

Empathy starts with synchronisation, which is ancient and exists throughout nature: fish do it, birds do it and humans do it. We are the most synchronised beings on earth – dancing, walking, even following our leaders. Yawn contagion exists in humans and chimps, and yawning is related to empathy. Psychology (one of the subjects De Waal teaches) tends to view empathy one-sidedl, while De Waal sees empathy as the synchronisation of two channels: the primary/emotional channel (we mirror another’s physical behavior, sad/sad, happy/happy, cry/cry – human babies do this from birth) and the cognitive channel (perspective taking, self/other distinction, and the ability to offer consolation).

Like humans, chimps recognise themselves in a mirror. But is this true of other empathic animals? Elephants display strong prosocial behavior, as a film of adult elephants rescuing a stranded baby elephant proved. So De Waal introduced an elephant to an appropriately elephant-size mirror and proved that elephants recognise themselves too. What does this tell us? that empathy and self-recognition go together and result in smart responses: doing the right thing in the right circumstances. 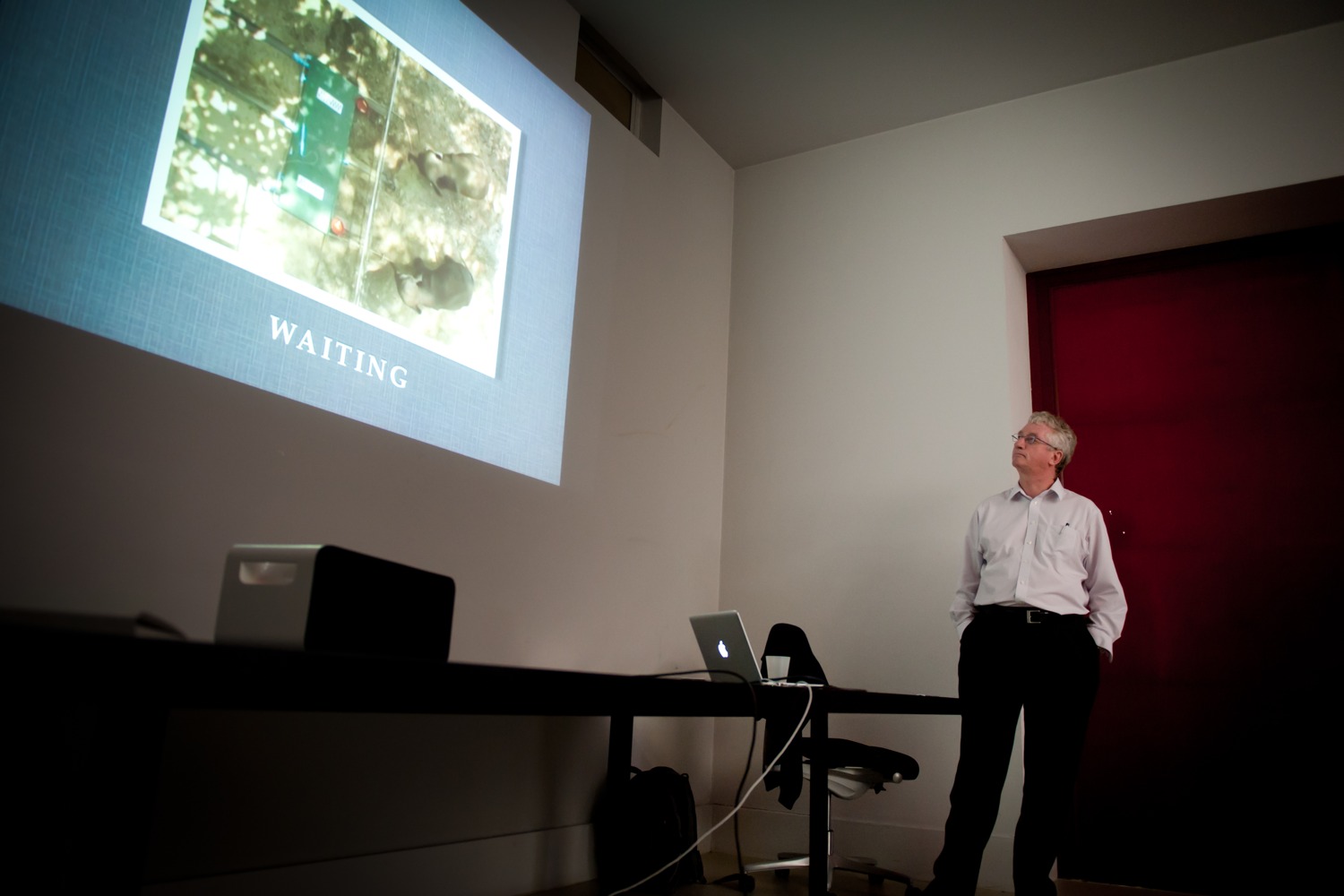 Another experiment with elephants showed that they work together and freeload, again similar to humans. Research conducted 10 years ago with Capuchin monkeys revealed that they are sensitive to fairness. If a pair of monkeys working on the same task were rewarded differently, they protested. Inequity aversion (an irrational/emotional reaction once believed unique to humans) is sensitivity to effort. Through his research, de Waal has proved that morality (reconciliation, empathy and consolation, self-awareness, altruism, cooperation and reciprocity, and fairness) comes naturally to a great variety of animals, including humans.

His conclusion: Darwin was right. Morality is deeply seated in primates. It is emotionally driven, involving ancient brain areas and gut feeling. Fairness and justice are innate to humans, and we developed morality as a means of survival.

Dr. Frans B. M. de Waal is a Dutch/American biologist and primatologist known for his work on the behavior and social intelligence of primates. His first book, Chimpanzee Politics (1982), compared the schmoozing and scheming of chimpanzees involved in power struggles with that of human politicians. His scientific work has been published in hundreds of technical articles in journals such as Science, Nature, Scientific American, and onther publications specialised in animal behaviour.

His popular books — translated into many languages — have made him one of the world’s most visible primatologists. His latest books are Our Inner Ape (2005, Riverhead) and The Age of Empathy (2009, Harmony). De Waal is C. H. Candler Professor in the Psychology Department of Emory University and Director of the Living Links Center at the Yerkes National Primate Center, in Atlanta, Georgia. He has been elected to the National Academy of Sciences (US), the American Academy of Arts and Sciences, and the Royal Dutch Academy of Sciences. In 2007, he was selected by Time as one of The Worlds’ 100 Most Influential People Today, and in 2011 by Discover as among 47 (all time) Great Minds of Science.